There is pretty good cycle access all the way from the eastern tip of Foster City to the Belmont Caltrain station. 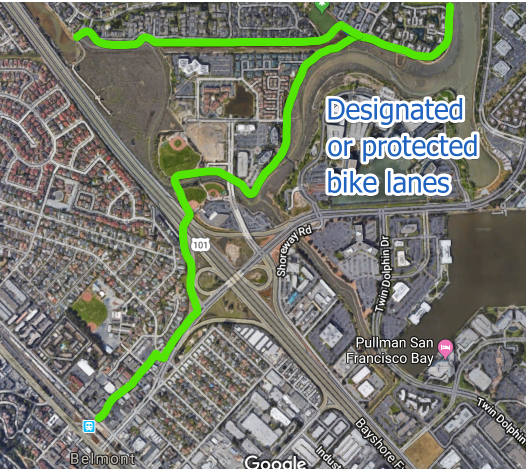 However, the cycling access from the Caltrain station to Safeway, NDNU or Carlmont Village falls down a little bit. There is a huge intersection at Ralston and ECR with no bike paths. The bike plan says cyclists should ride on Emmett past City Hall and rejoin Ralston further west, but there are no bike lanes in this area. 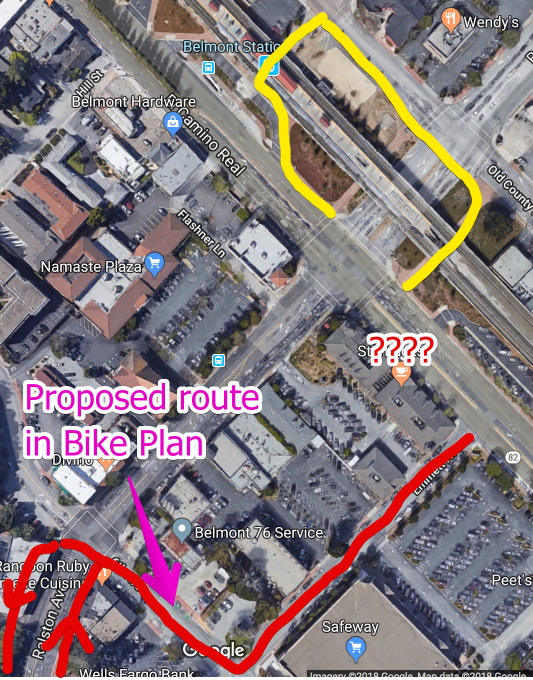 Emmett has no bike lanes and parking on both sides. 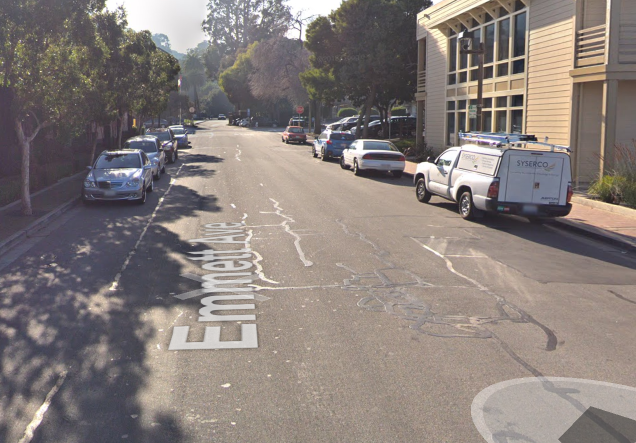 If you are riding east it is difficult to get from Emmett to the Caltrain station - cars can make a left turn across two lanes of ECR into fast moving traffic and then merge right, but this is dicey on a bike. I usually ride on the sidewalk past the Panda Express to the intersection. The sidewalk is narrow and passes the ECR Rapid bus stop.

The bike plan (page 72) calls for a HAWK crossing at ECR and Emmett to allow bikes to get across, then a bike lane on the east side of ECR. HAWK intersections are confusing for drivers, and no guarantee for ped/bike safety - your author recently spotted an instruction sign for drivers on the side of the road near a HAWK beacon on El Camino Real in Redwood City.

It would also require cyclists to make a dangerous crossing across ECR that no one currently attempts, cross the driveway for the parking lot, and add an additional stop that reduces vehicle/SamTrans ECR bus levels of service along El Camino Real.

How else could we get bikes from Caltrain to Emmett? One idea would be to have a two-way cycle track on the south side of ECR where there is currently a bus stop and a lane of parked cars. The bus would stop in the lane on ECR, like in this photo - we wouldn't have enough room for a bench to the left of the cycle track, but this should give the basic idea. 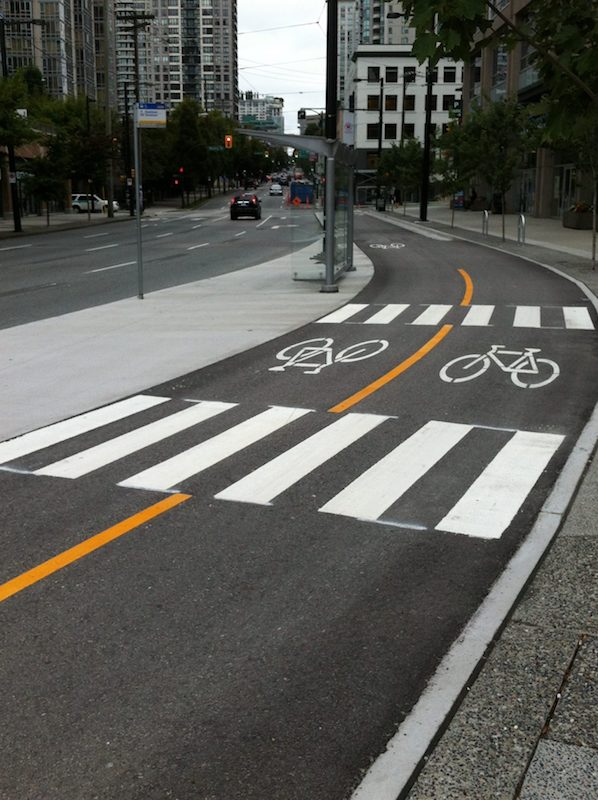 This would do a few different things, all of them good.

First, it does not introduce an additional stopping point for cars and SamTrans buses along El Camino Real, which means those roads will have a higher level of service.

Second, it would remove the need for a dangerous HAWK crossing and add a protected path on a dangerous section of road for cyclists. Particularly if you are heading east toward Caltrain, there are currently no good options for getting to the station.

Third, it would make the bus faster. Bus speeds are a problem for SamTrans that led to the introduction of the "ECR Rapid" bus route. Part of the problem are stops that require the bus to pull over, load passengers, then wait for a gap in traffic before merging back in. In-lane boarding would allow the bus to continue its journey without needing to merge back into traffic, saving up to 40 seconds per trip. 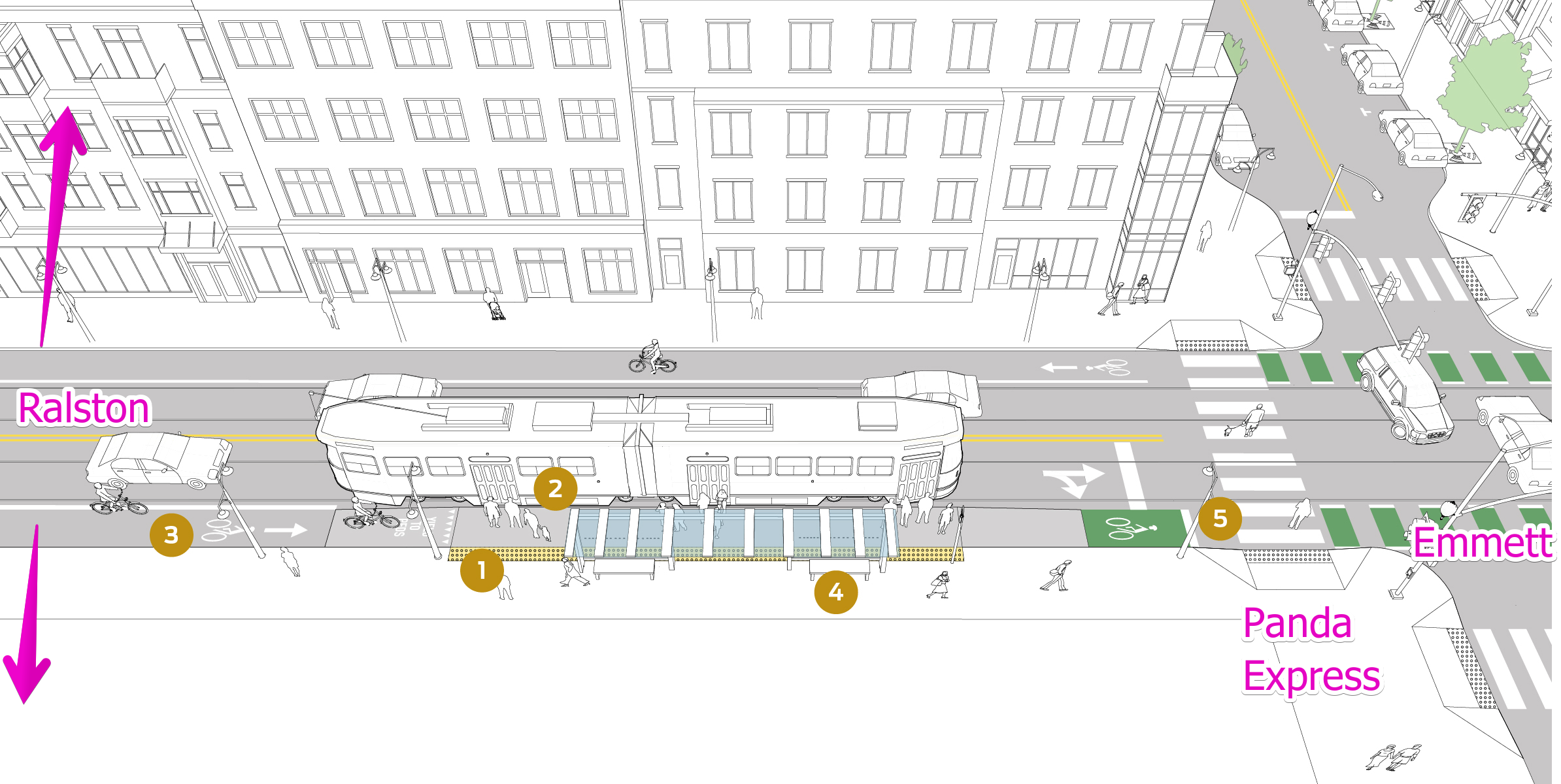 Fourth, it would likely be faster, by allowing bikes to piggy back on the existing pedestrian crossing at Ralston and ECR. HAWK beacons require all traffic to wait for the beacon to stop traffic, which can take thirty seconds or more.

Fifth, it could permit installation of an ADA compliant bus stop. The current bus stop offloads onto a brick sidewalk on a slope, intermixed with trees. A treatment in the cycle track segment could include a level boarding space for wheelchairs.

There are some problems, notably that there is not much room for this. Curb-to-median, this stretch of El Camino Real is 32 feet. The preferable alternative would be a bike lane protected by a bus island, like this one on Church St. in San Francisco. We can't do this because the recommended minimum width for bus islands is 8 feet, space that we don't have. 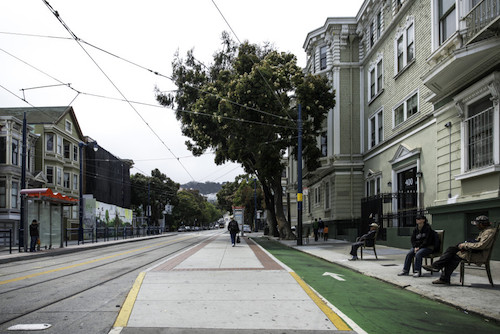 There is a one foot gutter next to the median and the car lanes are 10 feet each, giving us 11 feet for a 4 foot cycle track in each direction, plus a small buffer zone between the track and the car lane, which could include a railing for additional safety. The entire cycle track/buffer would be raised to the level of the current curb. 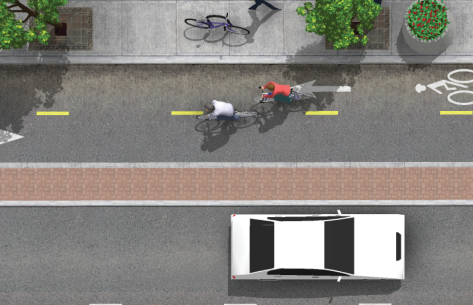 If you moved the limit line on ECR on the south side of Ralston back ten feet, you could add a treatment like this for crossing ECR on your bike: 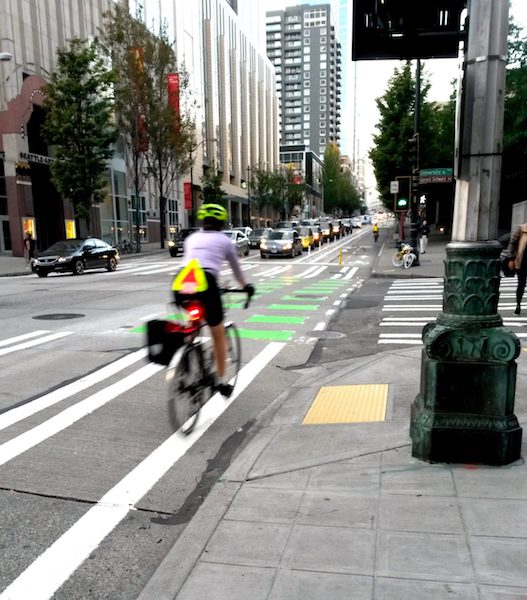 Which would result in a bike route through town like this, in both directions. 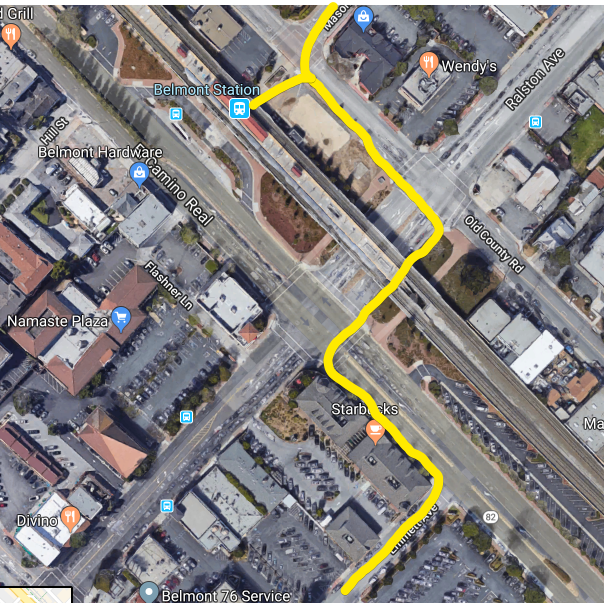 What do you think? I am not super happy with this design, but I'm not sure how else cyclists should be expected to get from Emmett St. to the Caltrain station. Moving the bus boarding in-lane would be a big win.

There is a meeting October 10, 6pm at City Hall where Belmont Public Works will be revealing plans for the HAWK beacon and other bike improvements. Please show up and provide your feedback.

One thought on “Improving Bike+Bus Routes through Belmont Village”