I finally got my home network in a place where I am happy with it. I wanted to share my setup and what I learned about it. There has never been a better time to set up a great home network; there are several new tools that have made this easier and better than in the past. Hopefully this will help you set up your home network!

My house is two stories on a standard 25 x 100 square foot San Francisco lot. The ground floor looks roughly like this:

We have a Roku in the living room. My goals for home internet were:

We are lucky to have Sonic Fiber internet service. Sonic comes in to a box in the garage, and an Ethernet line runs from there to the mudroom. None of the other rooms have Ethernet connections.

Sonic really wants to push Eero routers to everyone.1 Eero is fairly easy to set up, and Sonic collects a small fee from renting the router to you. You can extend your home network by adding more Eero's into a mesh network.

If you have a small apartment, an Eero is probably going to be a good fit. However, the mesh network was not great for achieving any of the goals I had in mind. The repeaters (Eero beacon) do not have any Ethernet out ports. It was difficult to extend the network from the mudroom to the bedroom without renting two extenders, which added about $100 per year, increased latency and lowered speeds. Further, clients on the network kept connecting to an Eero that was further away, instead of the closest one.

(NB: please don't stop reading here as I don't recommend this.) My next step was to replace the Eero's with a traditional Netgear wireless router in the mudroom. This also could not reach to the bedroom. So I bought a powerline adapter and plugged one end in near the router and the other end in the bedroom.

Powerline adapters send signal via electric current in your house. They don't offer great speeds. Devices on your network that use a lot of electricity, like laundry machines or the microwave, can render the powerline connection unusable.

There are probably better solutions for you than powerline adapters in 2020.

I called a cabling company about the possibility of running Ethernet to more rooms in the house. We decided the bedroom would be very easy since it's directly above the garage. It took a team of two two hours to drill a hole in the garage, run a cable up the side of the house to the bedroom, and install an Ethernet port in the bedroom. This cost about $200.

We looked at running Ethernet to other rooms but the geography of the stairs made this really tricky.

Our house has coax cables - the traditional method of getting e.g. cable TV service - running from the garage to four rooms in the house, but it doesn't have Ethernet set up. This is disappointing since it was built within the last decade.

There are two things you can do to future proof cable runs in your house, and ensure that cables can be replaced/swapped out if mice eat them or whatever. I highly recommend you implement them any time you are running cable. One is to leave a pull cable in the wall next to whatever cable you are installing. If you need to run a new cable, you can attach it to the pull cable, and then pull it all the way through from one end to the other.

Normally cables will be stapled to the wall interior, which makes them impossible to pull through. The other option is to leave cables unstapled. This will let you use the coax/other cable directly as the pull cable. In general though it's better to just leave a second pull line in the wall behind the port.

Without either of these solutions in place, running new cables is going to be messy. You can either try to hide it by running it along the exterior walls or ceiling of your house, or drill holes in the wall every few feet, pass a new cable through, and then patch up the holes.

Your internet speed will be bottlenecked by the slowest link in the network. Be careful it isn't your cables!

There are two flavors of Ethernet cable. Category 5 is cheaper, but can only support speeds of 100 Mbps. Category 6 is slightly more expensive but you will need it to get full gigabit speeds.

The Ethernet cables that come with the products you buy may be Cat 5 or 6. Be careful to check which one you are using (it should be written in small print on the outside of the cable).

To load google.com, your computer looks up the IP address for Google and sends packets to it. So far so good, but how does Google send packets back? Each client on the network needs a unique local IP address. The router will translate between an open port to Google, say, port 44982, and a local IP address, say, 192.168.0.125, and send packets it receives from the broader Internet on port 44982 to the client with that IP address.

What happens if two clients on your network try to claim the same local IP address? That would be bad. Generally you set up a DHCP server to figure this out. When your phone connects to a wifi network it sends out a packet that says basically "I need an IP address." If a DHCP server is listening anywhere on the network it will find an empty IP address slot and send it back to the phone.2 The phone can then use that IP address.

You can buy products that offer each of these independently - a four way switch without a radio or DHCP server will cost you about $15. But this is a convenient bundle for home networks.

If your network contains multiple switches or multiple routers you need to think about which of these devices will be giving out DHCP.

Furthermore, I kept running into issues where I would walk from the living room to the bedroom or vice versa but my phone/laptop would stay connected to the router in the room I was just in. Because that router was outside its normal "range", I would get more latency and dropped packets than usual, which was frustrating.

How to diagnose and measure this problem

On your laptop, hold down Option when you click the wifi button, and you'll get an extended menu that looks like this. 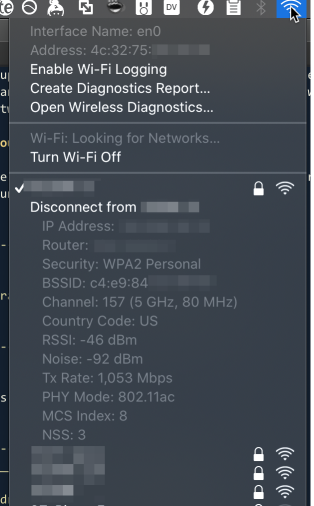 The key value there is the RSSI parameter, which measures the signal quality from your client to the router. This is currently at -46, a quite good value. Lower than -65 and your connection quality will start to get dicey - you will see lower bandwidth and higher latency and dropped packets.

Apple devices will hang on to the router they are currently connected to until the RSSI gets to -75 or worse, which is a very low value. This is explained in gory detail on this page. Because router coverage areas are supposed to overlap a little bit, this means the connection will have to get very bad before your phone or laptop will start looking for a new radio.

You can adjust the coverage area either by physically moving the router or by lowering the power for the radios (which you may be able to do in the admin panel for the router).

If neither of these works, as a last ditch attempt you can give your routers different network names. But this makes it more difficult to keep a connection when you roam from one router to the other.

I had not managed to get a fixed connection to the office, which would have required snaking a Ethernet cable over at least two doorways and three walls. However, I heard recently about a new technology called MoCA (multimedia over coax), which makes it possible to send an Ethernet signal over the coax line from the garage to the office. I bought a MoCA adapter for each end of the connection - about $160 in total - and wired it up and... it worked like a charm! 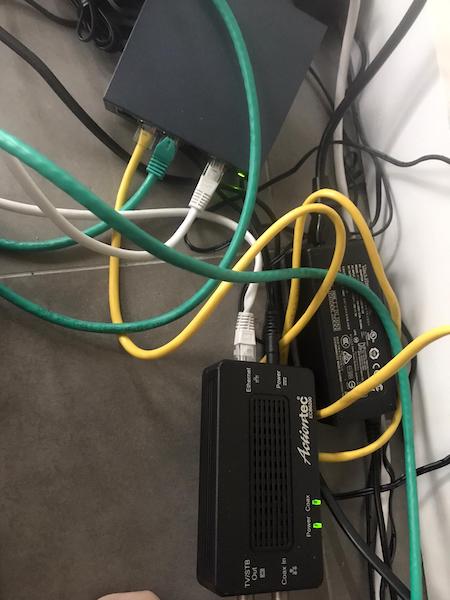 The latency is slightly higher than traditional Ethernet, but only by a few milliseconds, and the bandwidth is not as high as a normal wired connection but it's fine - I am still glad to be able to avoid a wireless connection in that room.

This change let me move my NAS into the office as well, which I'm quite happy about.

Letting Everything Talk to Each Other

At this point I had a $15 unmanaged switch in the garage that received a connection from the Sonic Fiber router, and sent it to three places - the bedroom, the living room and my office. However, the fact that it was unmanaged meant that each location requested a public IP address and DHCP from Sonic. Sonic was not happy with this arrangement - there is a limit of 8 devices per account that are stored in a table mapping a MAC address to an IP address, and after this you need to call in to have the table cleared out. This design also meant that the clients on my network couldn't talk to each other - I couldn't access the NAS unless I was connected to the living room router.

The solution was to upgrade to a "managed" switch in the garage that could give out DHCP. You can buy one that is essentially a wifi router without the radio for about $60. This has the same dashboard interface as your router does and can give out DHCP.

Once this switch was in place, I needed to update the routers to stop giving out DHCP (or put them in "pass through mode") so only a single device on the network was assigning IP addresses. I watched the routers and NAS connect, then assigned static IP's on the local network to each one. It's important to do this before you set them in pass-through mode so you can still access them and tweak their settings.

You should be able to find instructions on pass-through mode or "disable DHCP" for your router online. You may need to change the IP address for the router to match the static IP you gave out in the previous paragraph.

I finally have a network that supported everything I want to do with it! I can never move now. 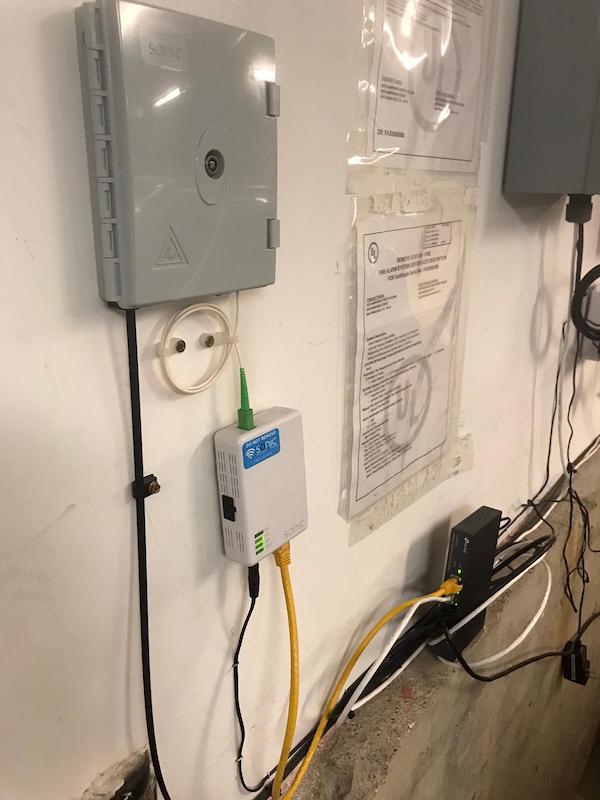 I hope this post was helpful. I think the most important thing to realize is that if you haven't done this in a few years, or your only experience is with consumer grade routers, there are other tools/products you can buy to make your network better.

If you are interested in this space, or interested in improving your office network along these lines, I'm working with a company that is making this drop dead easy to accomplish. Get in touch!

1. I posted on the sonic.net forums to get help several times. Dane Jasper, the Sonic CEO who's active on the forums, responded to most of my questions with "you should just use Eero." I love that he is on the forums but Eero is just not great for what I'm trying to do.

2. I'm simplifying - there are two roundtrips, not one - but the details are really not that important.