I've been working on the website for the Penn West Philadelphia Basketball League, a youth activity I help coach every Wednesday and Saturday. Take a look and tell me what you think.

More good stuff from Justin Wolfers, economics professor here at Penn. Wolfers, who last made sports headlines with a paper on point shaving in college basketball, has come back with a new paper on racial bias in refereeing decisions. The New York Times has an excellent review; not just a summary but an analysis of the paper, explanation of the technique, and even a peer review process.

The Warriors clinched the 8th spot in the Western Conference playoffs today, which means that we finished the season two games above .500 and will probably get blown out by the Mavericks in the first round. This is the first time the Warriors have made the playoffs since the 1993-1949 season, when they finished 3rd in the Pacific Division. Just for fun here is the Warriors roster and point totals from the 1994 season: Head Coach Don Nelson Latrell Sprewell 21 ppg Chris Webber 17.5 ppg Chris Mullin 16.8 ppg Billy Owens 15 ppg Avery Johnson 10.9 ppg Victor Alexander (??) 8.7 ppg Chris Gatling 8.2 ppg Jeff Grayer 6.8 ppg Todd Lichti 6.2 ppg Keith Jennings 5.7 ppg Josh Grant 3.0 ppg Tonight will be a celebration. I changed the header color to match the Warriors colors.

Don Imus has got in a lot of trouble recently for calling the members of the Rutgers women's basketball team "nappy-headed ho's." This is racist and offensive. I only wish he had insulted them before the conclusion of the women's NCAA Tournament. Then they might have drawn decent TV ratings. It is a shame Imus's insults have driven more publicity to the Rutgers basketball team than their on-court actions did. 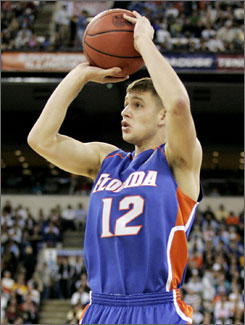 Florida's Lee Humphrey, the "other" Florida starter, has played 1180 minutes this season, yet has only shot 13 free throws. The entire season. Florida may lose tomorrow but I think it's unlikely...they tore apart Ohio State in January, they have the experience, they have the efficiency, and they have backup big men.

From Pete Carril: "Bad shooters are always open." "The ability to rebound is in inverse proportion to the distance your house is from the nearest railroad tracks."

I correctly picked all 4 results in last night's NCAA Tournament action, which I thought was pretty good until I realized I simply picked each #1 and #2 seed to make the Elite Eight. As usual, my bracket would be looking much better right now if I'd just picked every higher-seeded team to win every game. Tonight I have Florida, North Carolina, Georgetown, and Georgia Tech. Seven out of eight Elite Eight teams wouldn't be bad, even if it's just picking all the favorites to advance.

The story of the tournament so far has been the lack of major upsets. The lowest seed still remaining is #7 UNLV, and many strong teams survived the tournament's first weekend. I watched Penn play Texas A&M live, but missed a lot of the other action. Here are a few of my thoughts on the tournament: 1) If the seeding committee wanted to design the bracket so every higher-seeded team would win every game, they would set it up differently from the way it is now. They would set it up as 1 vs 9 5 vs 13 3 vs 11 7 vs 15 2 vs 10 6 vs 14 4 vs 12 8 vs 16 Which means that the current arrangement isn't as high-seed friendly as it could be, and which means that lower seeds (like Penn) can complain they had to play too difficult of a team, and the committee can say, "The higher seeds won every game, clearly our seeding process was good" and they can both be somewhat right. 2) Has anyone tested to see if the committee suffers from a recency effect in seeding teams (Syracuse gets a 5 last year, A&M gets a 3 this year, Oregon gets a 3) for the tournament? It could be tested with win percentage in the conference tourney vs. performance against the seed expectation. I think win percentage alone is over-rated by the committee. There are strong teams that play tough schedules and lose some games (North Carolina), and teams that get lucky and win more than they should against average teams (Long Beach State). 3) Can the preponderance of higher seeds getting to the Sweet 16 can be explained through the same probability as last year's brackets, or was the chance made more likely by the NBA age rules change? I hypothesize that the disparity between the best teams and the average teams in college basketball was made greater by the presence of players who would have jumped straight to the NBA, but instead played a year of college ball. 4) Tourney pools should give points for correctly picking teams to lose games in the tourney. For example I may pick Wisconsin to lose in the second round to GT, which may be because I think GT is good or it may be because I think Wisconsin will choke against whoever they play. So if Wisconsin ends up losing to UNLV, I think you should still be able to earn points in your pool. Otherwise if you have a team still 'alive' in your bracket vs. a team that you called incorrectly (say I picked Duke to play UCLA in the Sweet 16) even if you think the team that's still 'alive' is going to lose, you should pick them to win cause it's your only chance at getting points. 5) I really enjoy reading Ken Pomeroy's website, if only because they employ statistics and analysis to justify their opinions, rather than talking off the cuff. Here's an explanation of what he does at his website.

Yale is a 1 point underdog against Princeton. Let's get this straight. Yale is 9-4 in the Ivy League, and Princeton is 2-10. I would take Yale. I would also take Brown against Penn. Brown has way more motivation to win the game.

If these teams lose, Penn gets a better seed and a better chance of winning its first round game: #1 Yale - Gotta make the NCAA's first, two combined Yale losses or Penn wins will do it. Davidson/Appalachian State - most likely competing for one bid between them Holy Cross Vermont Butler Memphis Southern Illinois/Creighton/Mo State, by any team in the MVC that's not in Nevada UNLV/Air Force BYU Xavier/UMass to any team in the A-10 that's not in Winthrop VCU/Drexel/Old Dominion Gonzaga/Santa Clara